This is just a short post to announce the launch of our ArcGIS WebApp that enables the exploration of a limited version of our dataset in a web-mapping environment.

A user guide and links to the WebApp can be found by clicking on the Portal to the Past page in the menu above.

The WebApp itself can be found here: http://englaid.arch.ox.ac.uk

I have been thinking a lot recently about using maps as effective tools for visual communication of data. Chen et al. (2014) wrote that visualization of data should be about getting your message across in a time-efficient manner, which Kent (2005) stated depends upon producing aesthetically pleasing results. All maps (being one form of data visualization) are imperfect models of the world (as all models are imperfect) and we must take care to make sure that our maps communicate the messages we wish to express effectively.

Without wishing to get unduly political, I want to work through these ideas using the example of this summer’s “Brexit” vote. Data on the referendum results can be found here and data on UK boundary lines here. There are many (infinite?) different potential ways of visualising this data spatially, but I am going to explain the messages I see in a few examples here.

First up, we have a simple rendering of the results using the district divisions by which the data was originally counted and parcelled up, in which the saturation of the yellows (remain) and blues (leave) show the percentage lead each vote had in districts which each side “won”:

Yellow and blue have been used as that seems to be the convention settled on by most of our media. This map shows which areas felt particularly strongly one way or the other about the question asked and works well in that regard. However, it also gives a somewhat misleading message, as some of the high value districts are of relatively low population density. As an alternative then, we can keep the same division into “leaver” and “remainer” districts, but instead use the shading to show population density: 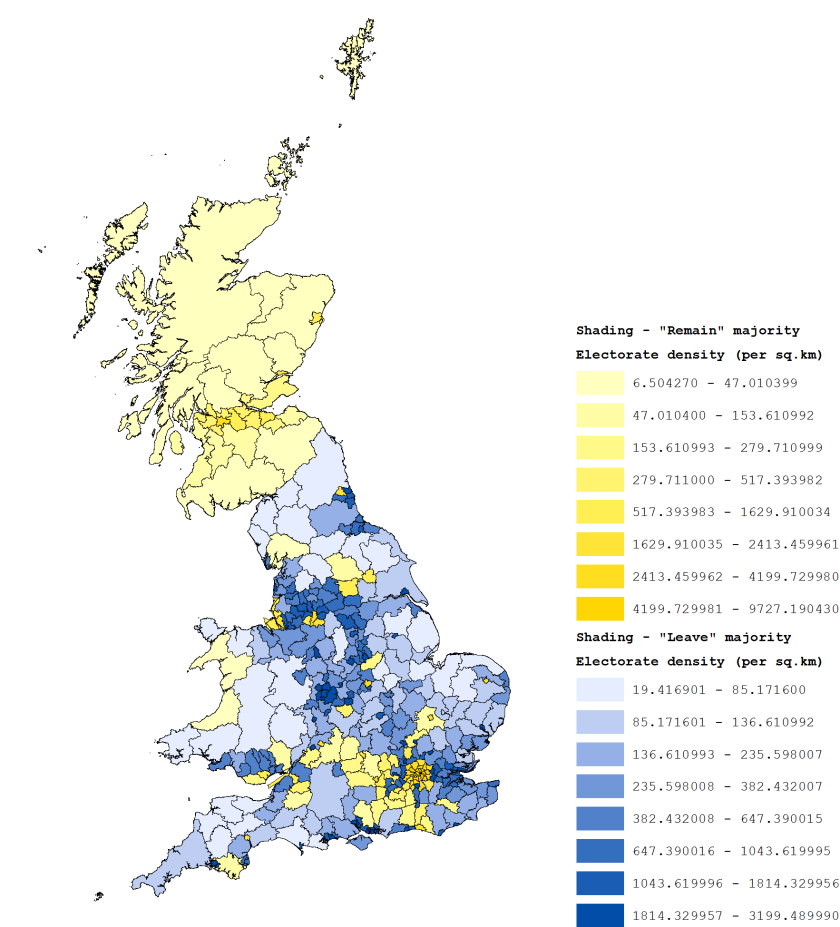 This map loses the nuance of showing how strong the vote was in either direction, but gains something by showing which districts have more people living in them. Most notable is the stark difference between the districts in eastern England around The Wash, which are of low population density (for the UK!), but which felt very strongly that the UK should leave the EU.

We can also look at the result in much more stark terms. The recent High Court decision has increased the likelihood of their being a Parliamentary vote on invoking Article 50, so I wanted to see which way the various constiuencies fell in terms of “leave” or “remain”. This is not simple, however, as the results were reported using districts, which often do not match constiuencies. As such, I reapportioned the vote from districts between consituencies on the basis of spatial area (e.g. if a constiuency covered half a district, it would receive half the votes). This is imperfect, as population density is not uniform across any district, but was the best I could do with the data to hand. The results show that, if Parliament does get to vote on Article 50 and MPs vote as their constituents voted, then “Leave” will comfortably win (Northern Ireland has not been included, but does not have enough MPs to make a difference either way):

All of these maps work reasonably well at expressing one element of the data, but I wanted to come up with a visualization that produced a more complex picture of the results yet without abandoning geographic space (i.e. I did not want to use a cartogram): 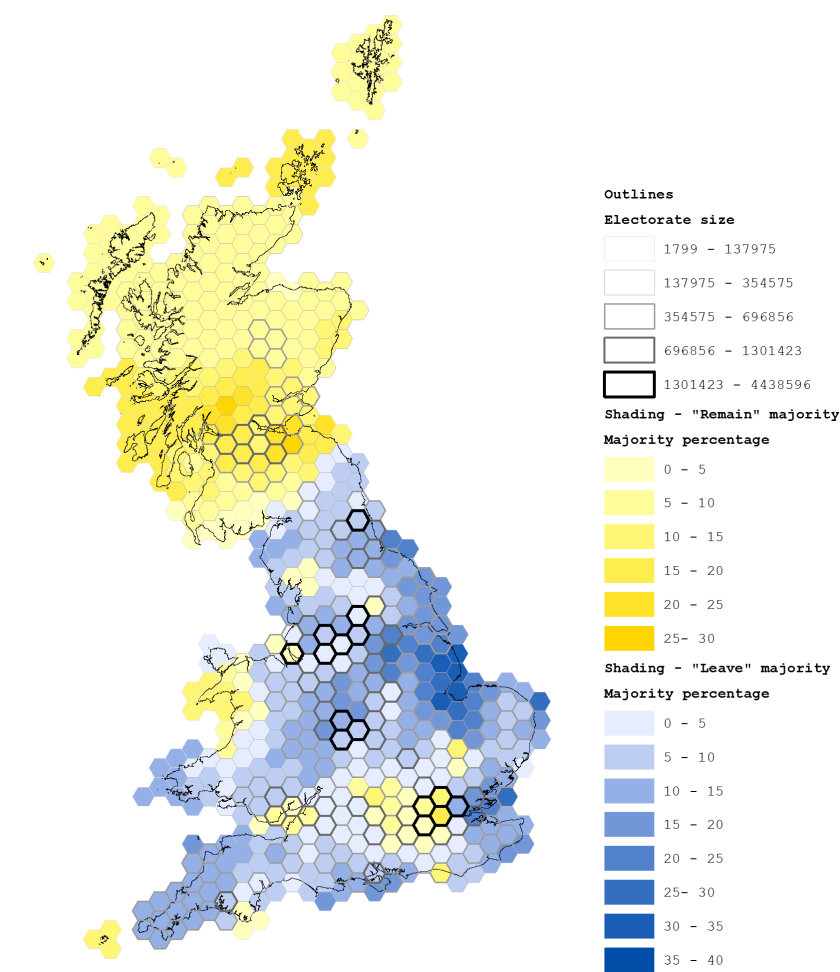 This final map reworks the results into hexagonal spatial bins, using the same method as when I reworked the results into constiuencies (i.e. assignment by spatial area overlap). Here, the blue / yellow shading has returned to showing the strength of the result, but we can now also see data on population at the same time through the thickness / blackness of the lines around the hexagons. I feel that this map does a pretty good job of showing the distribution of the vote (spatially, strength-wise, and population-wise) whilst still allowing people to locate themselves reasonably well geographically (which would not be the case with a cartogram). Hexagons have been preferred over squares largely to their visual appeal and due to the fact that humans have a tendency to see false straight lines in data binned into square-based grids.

Whatever you think of the referendum result, I hope that my worked example has helped to explain how making a map is not always a simple task. Careful thought about audience, message, and data structure needs to go into any visualisation if effective communication is to be achieved. I hope that my final map succeeds in that task!